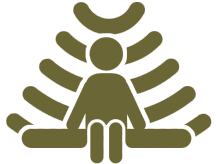 Raising cell temperature by 3 degrees F for a few minutes induces the cellular detoxification response. Therefore, if we raise core body temperature by 3 degrees for a few minutes, we have increased temp accordingly for all the body’s cells. This is called full-body detoxification.  Any heat source that achieves this will induce cellular detoxification. The best “heat shock therapy” approach is near infrared sauna, because the radiant, up to 9 inch penetration of near infrared wavelengths means we induce this temperature increase in the entire body most efficiently. Most all other heating methods (wet sauna, far-infrared, bathing) heat the body conductively, from outside in, and rely on the ambient air to heat the tissue, so the heating is less efficient.

Photobiomodulation (PBM), is a term from the field of photobiology, which studies the biological effects – both beneficial and harmful – of light wavelengths on living organisms. You may have heard of PBM referred to alternatively as: low-level light therapy, red light therapy, mitochondrial stimulation, mito-stim, or simply light therapy. Different names for the same thing.

PBM occurs when light photons are absorbed by living tissue, but not just any light will do. PBM is only possible within a certain wavelength range on the electromagnetic light spectrum: specifically from 600-1000 nanometers. This range is known as the ‘mitochondrial stimulation band’ (or ‘healing band’) because only these wavelengths of light stimulate the cellular mitochondrial light receptor enzyme, cytochrome-c oxidase. It thus encompasses both red light (600-700nm) and a portion of near infrared light (700-1500nm). When light from within this band of wavelengths is absorbed by the cells of the human body, the cell responds by increasing ATP production, releasing Nitric Oxide, and forming Reactive Oxygen Species – all of which work to produce large-scale systemic benefits to the health of the body. Some, but not all, of the studied benefits of PBM are: promotion of anti-aging, enhancement of athletic performance, improvements in memory and cognition, accelerated muscle healing, and boosted cellular regeneration.

SaunaSpace understands the serious problem of EMF stress: man-made magnetic and electric fields have been shown in many studies to be nervous system stressors. You definitely don’t want EMF stress coming from your therapy device! SaunaSpace design solutions ensure our products exert ZERO EMF influence on the body when used as directed. That means ZERO electric field stress and ZERO magnetic field stress.

SaunaSpace follows the highest standards of EMF protection: Geovitals Standards. Geovitals, the world-renowned Austrian Academy for Radiation Protection and Environmental Medicine, is known for setting the most stringent EMF shielding standards on earth. They recommend that any electric field reading above 30 V/m is a serious problem. Ideally we want 0 V/m. To put it simply, ideally we don’t want any part of our body to be in a space or on a surface that measures above 0 V/m.